Today’s hike starts in the small village of Tijarafe on La Palma. It takes you on beautiful hiking trails across meadows, fields and lonely fincas and banana plantations towards the Atlantic Ocean. There is a spectacular descent on narrow paths directly at the steep coast. At the bottom you will find yourself in the deserted Pirate’s Bay at Playa del Jurado.

rock face with path and hiker in Pirate cove

The small municipality of Tijarafe with its approximately 2,600 inhabitants lies on the southwest coast of La Palma. It has been independent since the middle of the 19th century. In the area around Tijarafe it hardly rains, so that water is scarce. But through the construction of water reservoirs, generations of people have already been fed from agriculture there. Since the beginning of the 20th century, the inhabitants have concentrated on growing tomatoes and bananas. The economic situation of the community improved through the construction of water canals and better road access in the last century. Today the small community has the second largest water reservoir of the whole island.

Pirate cove beach
The steep coast off the municipality of Tijarafe is inaccessible and cut by many gorges, such as the Barranco del Jurado. It is a protected natural monument. And you will get to know its scenic beauty on this hike. Pirate’s Bay, which can be reached from Tirajafe by two routes, is a former pirate town. This place was already mentioned as a harbour in the 16th century. Today there are fishing huts and weekend cottages. 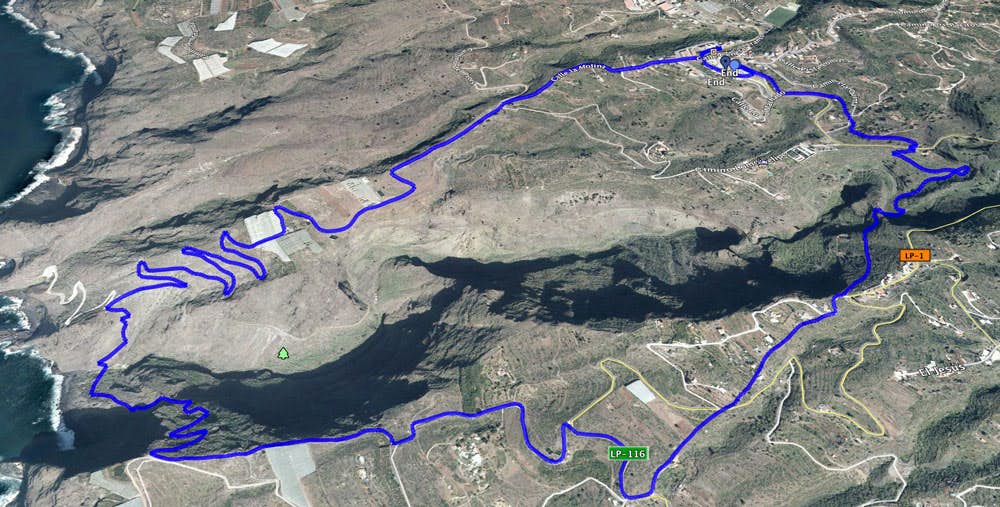 General information on the circular walk around Tijarafe

The starting point of this hike is the centre of Tijarafe on LP-1, the main road through the centre of the town. There are plenty of parking spaces on both sides of the road.

Tijarafe can be reached by car on LP-1. From the south from Los Llanos and from the north from Puntagorda.

Sign up for my newsletter now and get exclusive access to my collected GPS tracks as well as all the brief information about my articles.
Sign up now
In Tijarafe the bus line 100 stops. Further information can be found on the homepage Transportes Insular La Palma.

I do not like to give general time information for hiking tours, because the times are very individual. For this tour I needed with an extensive stay in the pirate bay scarcely 5 hours.

Difference in altitude and distance

The difference in altitude is about 715 meters gross. And the distance is 8.5 kilometers long.

The distance is not so long. But it goes very steeply on narrow ways at the steep coast downhill and on the other side again uphill. That’s why fitness, freedom from kicks and vertigo are needed. I walked the hike on a very warm day, so that the tour was a bit exhausting.

Restaurants, bars and shops are only in Tijarafe. Therefore, please take enough water and food with you.

If needed, this tour can be extended a little on the way there. I went directly down the Calle Molina to the pirate bay. But if you like, you can descend in a larger arc over the next mountain ridge. In order to go this bigger tour, you do not have to go down the Calle Molina to the left of the main road. Instead you follow the LP-1 a little further in the direction of Puntagorda. Before a large right turn, a road (Calle Grupo Escular) branches off to the left, taking you along a marked hiking trail (PR LP 12.2) and small roads towards Punta de Candelaria.

pirate cove with huts and ruins

Tijarafe section to the car park above Pirate’s Bay

Your hike starts at the main LP-1 road in Tijarafe. Before a sharp right bend, Calle de la Molina branches off to the left. Follow it first on the road and then downhill on a road. But don’t worry, there are very few cars on this “wide path”. The trail descends parallel along a Barranco gully. Then the path bypasses a farmstead. At the next homestead you walk on the road through the middle of a banana plantation.

Street and parking on the saddle above Pirate's Cove
At the end of the plantation, the road leads into a road that winds its way down in long serpentines towards the coast. Here you go in the long serpentines (6 pieces) in the direction of the coast downhill. There is hardly any traffic here. Very few cars come to stop at the small square at the end of the serpentines on the ridge and ridge. From there is the shortest way to the bay. Once you have reached this small parking lot in the middle of the mountain ridge, you can enjoy wonderful views of Pirate’s Cove, the neighbouring cove and Barranco del Jurado.

hiking path on the steep face above Pirate´s Cove

Sign up for my newsletter now and get exclusive access to my collected GPS tracks as well as all the brief information about my articles.
Sign up now

You have already descended from about 660 to 150 meters of altitude. Before you descend to Pirate’s Cove, if you have time, you can look around a bit towards the other side. You will reach a Mirador via a road and can descend further on a road. When the road ends, if you like, you can descend to Porís de Candelaria. If you’ve gone the bigger way, you’ll come back up exactly this way.

Pirate´s Cove with huts and hiking path
But the circular path described here leads you directly from the car park down to Pirate’s Cove. These last 150 meters of altitude difference you go down in narrow serpentines quite steeply at the rock face. The path can be seen quite well on the pictures from the opposite side. After a short time you have reached Pirate’s Cove. Here you should have a look at the beach and around the many fishermen and weekend cottages. You can go to the small stony beach of Playa del Jurado when the sea is calm. Near here (south) is the Cueva Bonita, which is often visited by tourist boats. However, there were also some terrible accidents with boats, which were pressed against the cave ceiling during heavy seas. 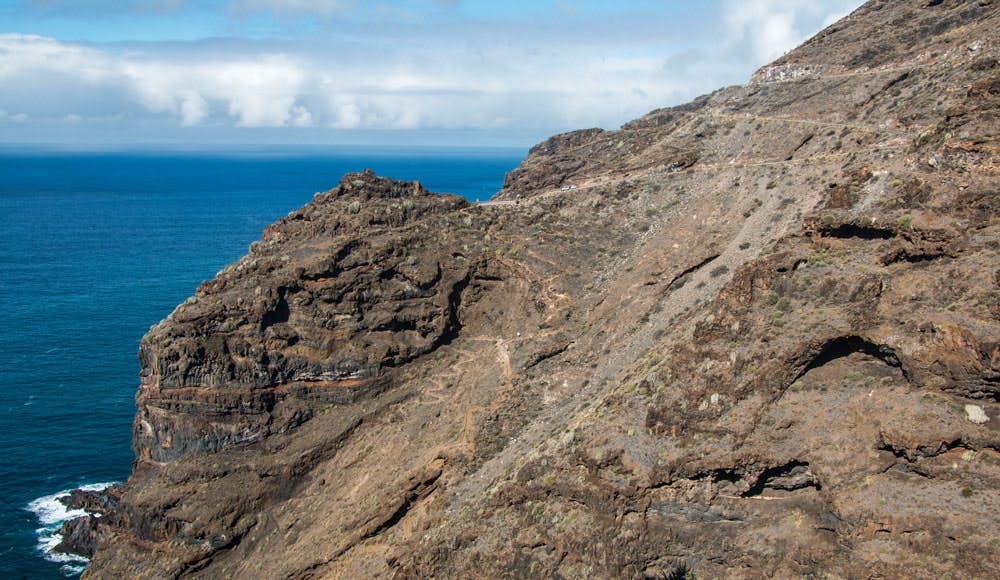 steep face with ascent path - Pirate´s Cove Tijarafe
In one of the houses you can also visit a large fountain. This is the Pozo del Jurado, which provides fresh water on the beach. In former times, even the water was transported from there to the plantations by the material cable car, which you will pass on your way back. In Pirate’s Cove there should definitely be time for a small picnic. 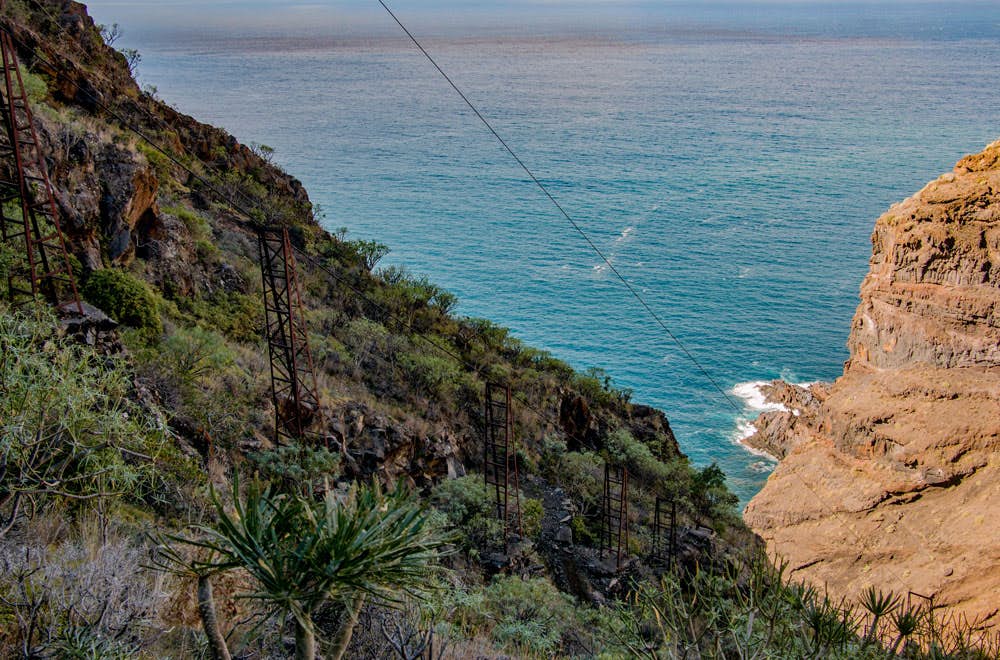 If you have had a quiet look at Pirate’s Cove, you are now ready for the ascent. On the other side of the beach the path leads you uphill in serpentines. During the ascent you will meet the material cable car, which you will walk parallel to for a while. The ascent goes first in narrow small serpentines and later in wide large serpentines. Behind you you can continue to enjoy fantastic views of the cliffs and Pirate’s Cove. High above you is Tijarafe. Then you have completed the hardest part of the ascent. You are standing at the Mirador del Barranco Jurado.

At the hamlet of El Jesús you leave the path and the road and this time take the GR-130 path to the Barranco del Jurado. The path leads you back downhill and around the Barranco del Jurado, keeping an arc in height. Finally you come to a very prominent rock. You walk around it and then a little downhill into the Barranco bed. But then it’s only uphill to Tijarafe. First you climb up out of the Barrancobett. But if you think you’ve almost reached the top, the path makes a very wide curve again.

View on a finca underneath Tijarafe
Finally you have made it and are back on the main road LP-1. You cross it. The Camino leads you up the slope. And parallel to the main road you walk towards Tijarafe. You cross the road Camino la Quinta. Then walk parallel to Calle de los Poetas. At Calle Calvo Sotelo you come back onto the road. From there you can make a small detour to the church. Then you can take the stairs back to the main road LP-1, the starting point of the hike.

I hope you enjoyed this beautiful tour on Isla Bonita, La Palma. Unfortunately, I have only done this impressive circular hike once so far. Unfortunately I had no time for the many possible extensions. Maybe you’ll feel better in time and you’ll be able to make a little detour to Porís de Candelaria. Whatever. I wish you pleasant, safe and interesting hikes in the future,
Dagmar von Siebeninseln